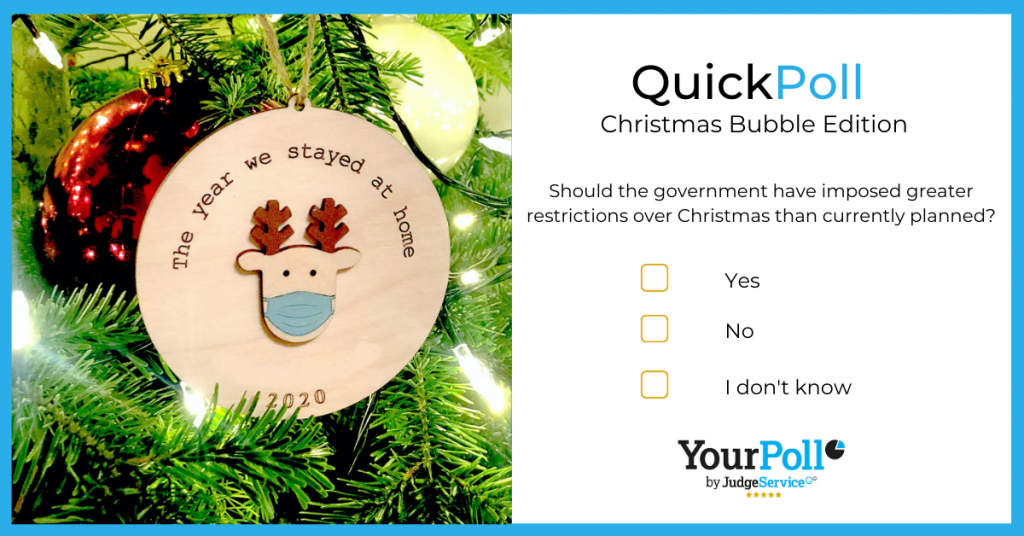 “Should the government have imposed greater restrictions over Christmas than currently planned?”

Our QuickPoll revealed that 70% of people surveyed thought that we should have greater restrictions imposed regarding Christmas and household mixing, before the announcement of a Tier 4 on Saturday.

Once the Prime Minister announced the new restrictions, we froze our QuickPoll.

When asked why they wanted stricter regulations, the majority agreed with the idea that “a vaccine is just around the corner, so why take the risk”.

Interestingly, over 82% of those who were opposed to relaxing Covid rules, were female.

Men seemed to take a more laid-back approach and were happy with the original plans Boris Johnson had made for the five days over Christmas.

With the U-turn announcement on Saturday afternoon placing London and the South East of England into a new Tier 4, it was intriguing to find that the majority of “yes” votes came from the South East.

It seems that despite Christmas plans being ruined for many, the new rules were not a stone’s throw from what some people expected from the government anyway.

The majority of people who wanted the rules to stay as they were, gave the reason “the government should trust our common sense”.

However, with Covid cases rising and hospital admissions growing in numbers day-by-day, relying on the public’s “common sense” seems unlikely to be the best route in the current climate.

This poll was frozen after Boris Johnson’s announcement on Saturday afternoon. This poll was completed by 177 people – a randomized UK sample.

Are you interested in being paid for answering our QuickPolls? They take less than 2 minutes. Click here to sign up to be a YourPoll judge and we will pay you for your opinion.

Get paid more for our longer interest surveys by YourPoll, for registering we will give you £2.50!

Want to partner with YourPoll to find out some real, verified and quantifiable data for your business? Email us at contactus@yourpoll.co.uk or ring us on 01423 649031